Governing Security After War: The Politics of Institutional Change in the Security Sector by Louis-Alexandre Berg 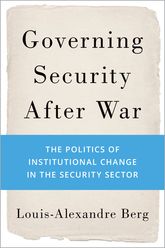 The UN has adopted “Security Sector Reform” (SSR) as a pillar of peacebuilding and sustaining peace, emphasizing good governance and oversight of security forces. Evidence points to the effects of security governance on the onset and duration of armed conflict, and on sustained peace and public safety. Yet efforts to engage the security sector have confronted political challenges, raising questions about UN support to institutional change as a path toward sustained peace. While the UN emphasizes national and local ownership, political tensions around security institutions often fuel opposition by some groups to increased accountability. It is not clear when institutional changes are most feasible, and what role the UN can play in these changes. The roundtable will explore these questions through a discussion of Louis-Alexandre Berg’s recently published book, Governing Security After War. The book examines how the interaction among national actors, peacekeepers, and donors affect the development of the security sector. It highlights internal political factors that shape considerations regarding the governance of security forces and explores how external engagement affects prospects for institutional change. The roundtable will bring together scholars and practitioners to explore evidence regarding the most effective approaches to SSR, with a focus on how the UN best manages the political challenges of institutional development in the context of peacekeeping and peacebuilding.